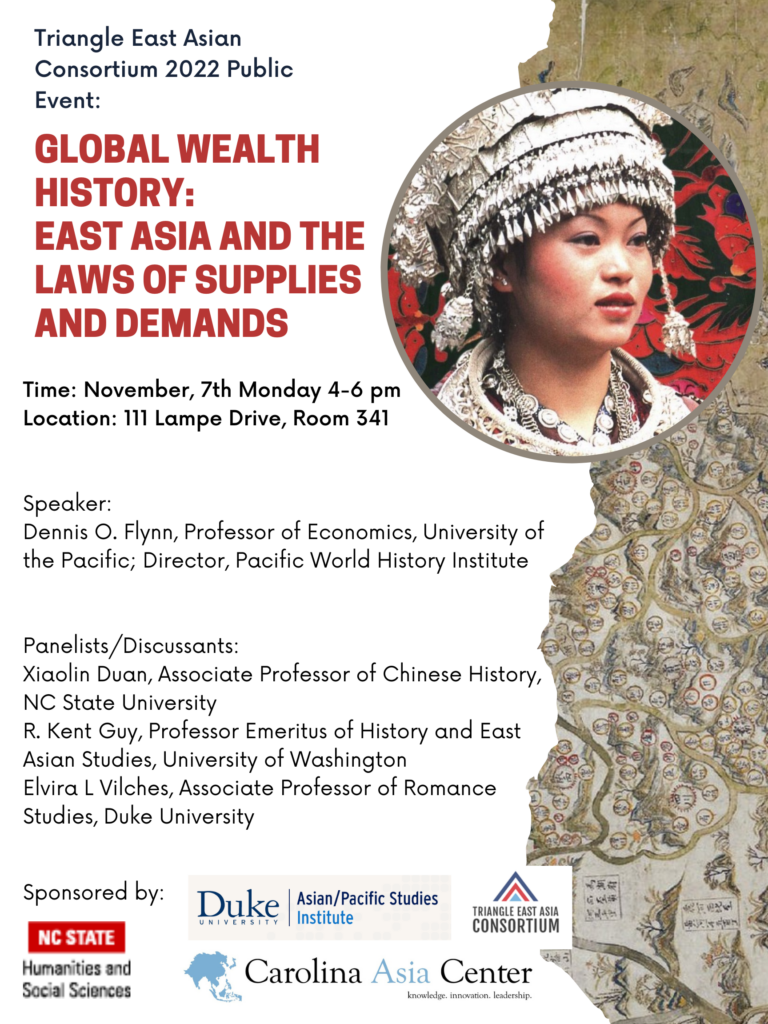 The Triangle East Asian Consortium is excited to present a public event:

Global Wealth History: East Asia and the Laws of Supplies and Demands

In this panel, Professor Dennis O. Flynn (Emeritus Professor at the University of Pacific and Director of the Pacific World History Institute) will introduce his unconventional model of Supplies and Demands within the context of East Asian history and the birth of globalization. Dr. Flynn has long been known for linking international monetary theory with silver history in the debate on early modern globalization. In response to decades of inconsistencies between historical evidence and standard theory, Flynn co-created a new economic model that gradually evolved into dynamic Laws of Supplies and Demands and a Price Theory of Monies. Based on a new book project, Wealth: History and the Laws of Supplies and Demands, his talk will illustrate the historical roots of accumulated wealth components, wealth accumulation in general, and wealth inequality.

The talk will be followed by a short case study “Silk Raising and the Decline of the Ming Dynasty” by Xiaolin Duan from the History Department at NC State. Applying the Law of Supplies and Demands, this case study presents interconnections between China, Manila, and New Spain in the 17th-century crisis.

Light refreshments will be provided.

This event is co-sponsored by the Triangle East Asian Consortium, the Department of History @ NC State, the Asian/Pacific Studies Institute @ Duke University, and the Carolina Asia Center @UNC.