Tea in the American Experience: From Colonial Times to Today

Today, Americans are some of the world’s biggest consumers of black teas; in Japan, green tea, especially sencha, is preferred. These national partialities, Robert Hellyer reveals, are deeply entwined. 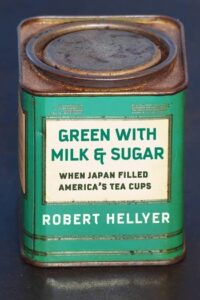 In his new book, Green with Milk and Sugar: When Japan Filled America’s Tea Cups (Columbia University Press, 2021), Hellyer explores the forgotten American penchant for Japanese green tea and how it shaped Japanese tastes. In the nineteenth century, Americans favored green teas, which were imported from China until Japan developed an export industry centered on the United States. The influx of Japanese imports democratized green tea: Americans of all classes, particularly Midwesterners, made it their daily beverage—which they drank hot, often with milk and sugar. In the 1920s, socioeconomic trends and racial prejudices pushed Americans toward black teas from Ceylon and India.   Bio: Robert Hellyer is associate professor of history at Wake Forest University. He is the author of Defining Engagement: Japan and Global Contexts, 1640–1868 (2009) and coeditor of The Meiji Restoration: Japan as a Global Nation (2020).   Register by clicking this link. This event is co-sponsored by the Carolina Asia Center, the UNC Department of History, and the UNC Department of Asian and Middle Eastern Studies.