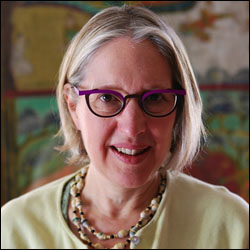 A lecture by Anne Hansen, Professor of Religious Studies and Southeast Asian History at the University of Wisconsin-Madison.

Buddhist Temporality and Interpretations of Mass Atrocity in Cambodia

Buddhist prophesies about the end of our time and the dawning of a new era tied to the enlightenment of the fifth buddha in our kalpa or “epoch” have circulated widely across the Buddhist world for nearly two millennia. In Cambodia, these millenarian prophesies have also served  as a powerful and pervasive response to and explanation for the genocidal Khmer Rouge regime, one that is rarely acknowledged in scholarly interpretations of recent Cambodian history. This talk draws on my current research investigating Buddhist prophesies that have inspired millenarian poetry, prose and political and religious movements in Cambodia from the colonial era to the post-Socialism of the 1990s. It will raise intertwined questions of whether and how Buddhist prophetic conceptions of temporality might serve as an alternative frame for understanding the temporality of the Cold War in Cambodia as well as questions about the ethics of representing the suffering of others in scholarship.