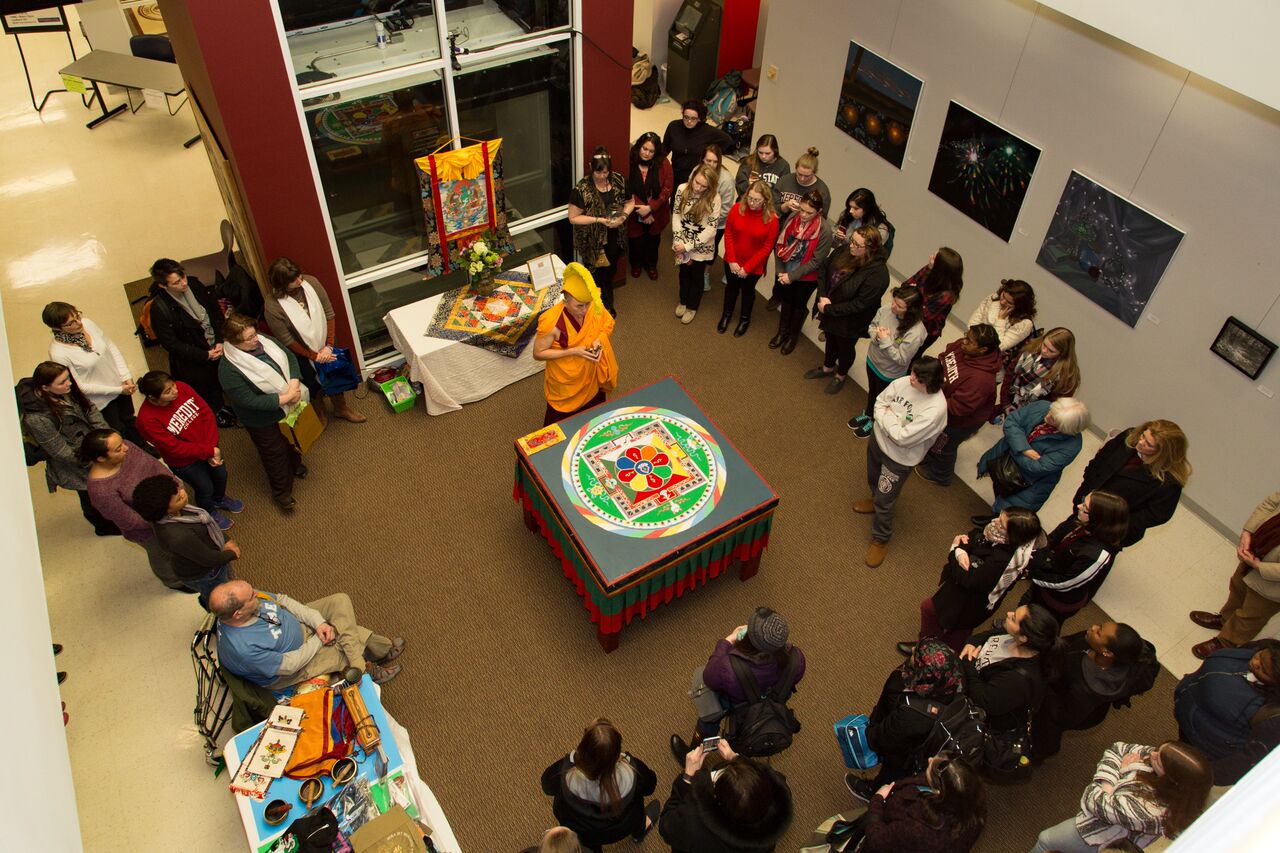 From Feb. 22-25, Geshe Palden Sangpo from the Kadampa Center for the Practice of Tibetan Buddhism in the Gelugpa Tradition will create a sand mandala in the FedEx Global Education Center. Dr. Lauren Leve, Associate Professor of Religious Studies, will give opening remarks at 10:00 a.m. Sand mandalas are an ancient, sacred form of Tibetan Buddhist art.  The word mandala itself is a Sanskrit word meaning “circle” and at its deeper levels a mandala represents the wholeness and harmony at the heart of the Tibetan Buddhist universe.
Geshe Palden Sangpo was born in 1972 in Kham Karze, eastern Tibet. He left his hometown at the age of 12 and  crossed the Himalayan mountains on foot to be educated in Sera Jey Mahayana Monastery in southern India. He received his novice vows in 1987 from Gaden Tripa Lobsang Nima at Drepung Monastery. In 1995, he received his full ordaination vows from His Holiness the Dalai Lama at Sera Monastery. In 2001, after 17 years of studying the five major Buddhist texts at Sera Jey Monastery, he graduated as one of the youngest people ever to receive a Geshe degree. At the guidance of his teacher, Sera Jey abbot Geshe Lobsang Delek,  Geshe Sangpo then went to Gyudmed Tantric Monastery for a one year course of study on tantra. After completing this course, he returned to Sera Jey Monastery and was elected to a three year position as the Administrator of Sera Jey Healthcare Community. Ritual practice, particularly Haya Girva ritual practice, is Geshe Sangpo’s area of expertise. For five years he was one of the leaders of the Haya Girva practice group in Sera Jey Monastery. In 2008, Geshe Sangpo moved to Raleigh North Carolina where he teaches several classes and provides guidance on ritual practice at the Kadampa Center, FPMT. He has lectured on the topic of Tibetan Buddhism and its rituals at The University of North Carolina at Chapel Hill, Duke University, Elon University, Meredith College, University of North Carolina-Asheville and Winston Salem State University. In October 2014, Geshe Sangpo was officially approved by FPMT as a resident teacher at Kadampa Center.
This event is part of Asia Week 2017.