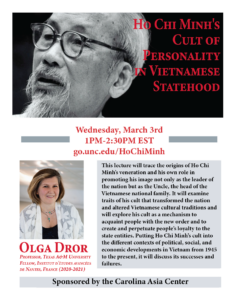 “What can I do? The people need a god,” said Joseph Stalin as he was endeavoring to wipe out religious traditions in the Soviet Union. As occurred in many other countries where communist parties came to power, the Vietnamese communists dismissed preexisting deities when they established their rule, for these did not correspond to their ideology and policy goals. The first president of the Democratic Republic of Vietnam, Ho Chi Minh, became the center of a new political religion that was essential in establishing and cementing the communist version of Vietnamese statehood and that eventually became part of the Vietnamese religious landscape.   This lecture will trace the origins of Ho Chi Minh’s veneration and his own role in promoting his image not only as the leader of the nation but as the Uncle, the head of the Vietnamese national family. It will examine traits of his cult that transformed the nation and altered Vietnamese cultural traditions and will explore his cult as a mechanism to acquaint people with the new order and to create and perpetuate people’s loyalty to the state entities. Putting Ho Chi Minh’s cult into the different contexts of political, social, and economic developments in Vietnam from 1945 to the present, it will discuss its successes and failures.   Olga Dror is a Professor of History at Texas A&M University and for 2020-2021 a fellow of the Institut d’études avancées de Nantes, France.   Register here.