Prof. Jane Ferguson of the Australian National University will speak on her new book: Repossessing Shanland: Myanmar, Thailand, and a Nation-State Deferred (University of Wisconsin Press, 2021). 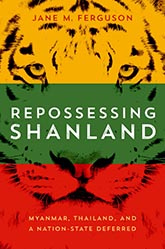 Around five million people across Southeast Asia identify as Shan. Though the Shan people were promised an independent state in the 1947 Union of Burma constitution, successive military governments blocked their liberation. From 1958 onward, insurgency movements, including the Shan United Revolutionary Army, have fought for independence from Myanmar. Refugees numbering in the hundreds of thousands fled to Thailand to escape the conflict, despite struggling against oppressive citizenship laws there. Several decades of continuous rebellion have created a vacuum in which literati and politicians have constructed a virtual Shan state that lives on in popular media, rock music, and Buddhist ritual. Based on close readings of Shan-language media and years of ethnographic research in a community of soldiers and their families, Jane M. Ferguson details the origins of these movements and tells the story of the Shan in their own voices. She shows how the Shan have forged a homeland and identity during great upheaval by using state building as an ongoing project of resistance, resilience, and accommodation within both countries. In avoiding a good/bad moral binary and illuminating cultural complexities, Repossessing Shanland offers a fresh perspective on identity formation, transformation, and how people understand and experience borderlands today. This event is free and open to the public, and will be presented in a hybrid format. Those available to join in person can meet in the FedEx Global Education Center, room 1009. Those joining online via Zoom should register by clicking here.
+ Add to Google Calendar