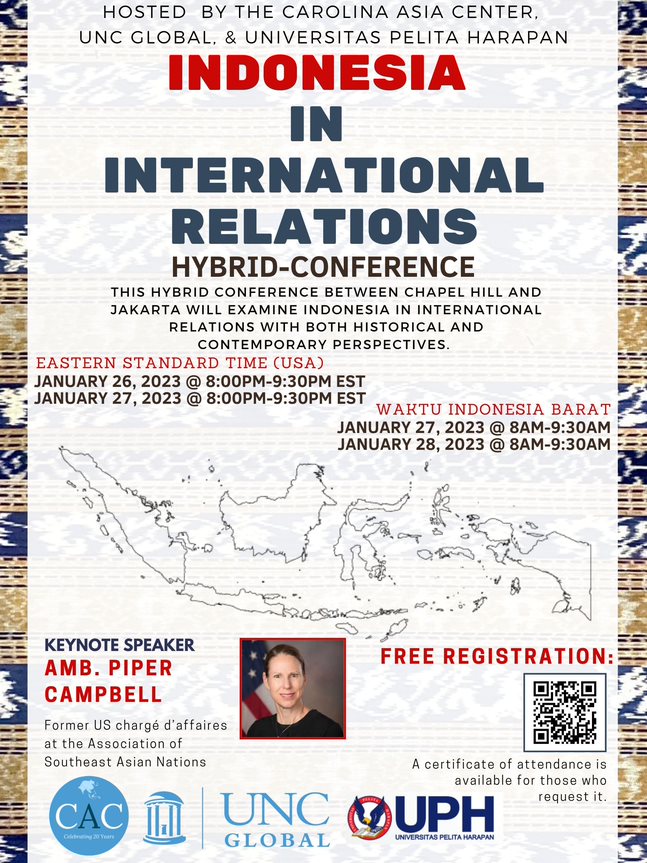 To celebrate the 75th anniversary of UNC President Dr. Frank Porter Graham negotiating the Renville Treaty during the Indonesian Revolution, and in recognition of Indonesia’s recent chairmanship of the G20, the Carolina Asia Center and the Office of the Vice-Provost for Global Affairs are proud to present a conference on Indonesia in International Relations, in collaboration with Universitas Pelita Harapan.

On 17 January 1948, under the auspices of a United Nations committee convened by then-president of UNC, Dr. Frank Porter Graham, the Indonesian Republican government under Sukarno and Mohammad Hatta signed the Renville Agreement, the first multi-lateral agreement in the country’s history. Since that date, Indonesia has had an important role in international relations, from the establishment of the Third World movement at the Bandung Conference in 1955 to its leadership in the Association of Southeast Asian Nations (ASEAN) since the 1970s.

This hybrid conference, co-convened by the Carolina Asia Center, UNC-Global, and Universitas Pelita Harapan’s program in International Relations, will examine Indonesia in international relations with both historical and contemporary perspectives, across two days.

This event is free and open to the public. Those in Chapel Hill, NC, can join in-person in the Nelson Mandela Auditorium in the FedEx Global Education Center. Those in Jakarta, Indonesia, can join in-person on the campus of Universitas Pelita Harapan. Anyone can register at go.unc.edu/Indonesia to join the Zoom session virtually.