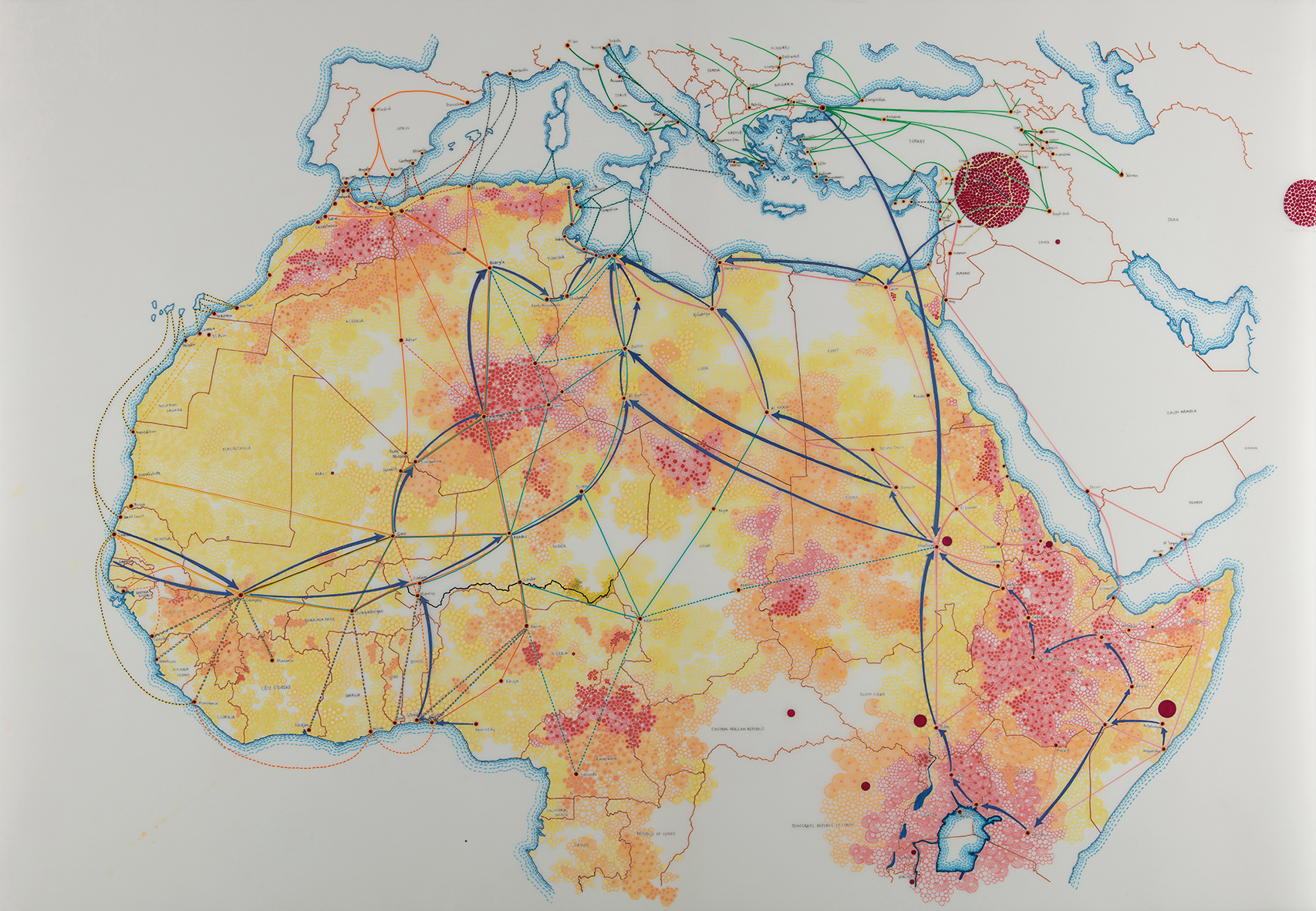 Tiffany Chung is internationally noted for her exquisite cartographic drawings and installations that examine conflict, migration, displacement, urban progress and transformation in relation to history and cultural memory. Chung’s work studies the geographical shifts in countries traumatized by war, human destruction or natural disaster. Her map drawings layer different periods in the history of devastated topographies, reflecting the impossibility of accurately creating cartographic representations of most places. Transgressing space and time, these works unveil the connection between imperialist ideology and vision of modernity. Her maps interweave historical and geologic events, spatial and sociopolitical changes with future predictions, revealing cartography as a discipline that draws on the realms of perception and fantasy as much as geography. Exploring world geopolitics by incorporating international treaties with local histories, Chung’s work remaps memories denied in official records. Based on meticulous ethnographic research and archival documents, Chung’s work excavates layers of history, re-writes chronicles of places, and creates interventions into the spatial narratives produced through statecraft. Her interest in imposed political borders and their horrendous, traumatic impacts on different groups of human populations have underpinned Chung’s commitment to conducting an ongoing comparative study of forced migration through the current global refugee migration, the Syrian humanitarian crisis and the post-1975 mass exodus of the Vietnamese refugees. By unpacking the Vietnamese refugees’ experiences and tackling the asylum policy applied towards them in the past, this project aims to give insights into the impact of constant shifts in asylum policymaking on already traumatized and distressed people. Chung’s Syria Project was featured in the 2015 Venice Biennale, with 40 map-based drawings relating to the ongoing crisis in Syria presented in the main exhibition All The World’s Futures.

Tiffany Chung is a co-founder of Sàn Art, an independent art space in Hochiminh City, Vietnam.

An endowment established in 1983 through the generosity of Nancy and Robin Hanes supports the Art Department’s Visiting Artist Series. This important program brings both established and emerging artists to campus to discuss their work in public lectures and to offer individual critiques to our M.F.A. students.  The Hanes Visiting Artist series greatly enriches both our academic programs and our outreach to the wider community.  All lectures are free and open to the public.

Department of Art and Art History