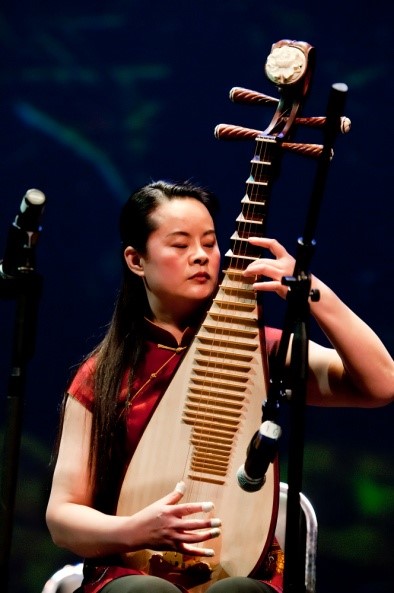 The Chinese qin instrument has a history of more than 3,000 years. It is considered one of the gentleman’s four arts that cultivated the cultured men in China for more than two millennia. Qin music further defines the essence of Chinese traditional music that reflects both the Confucian and the Daoist aesthetic ideals. With this important status in the traditional Chinese culture, every learned man in traditional China played the instrument and was conversant with the aesthetics governing the qin music.

Miss Zou, from Changsha, Hunan Province, specializes in many Chinese traditional instruments including Guqin (Chinese zither), Guzheng (Chinese table harp), and Pipa (the lute). She was born into a family of generations of Chinese musicians. She began her studies of Pipa and Guzhen at the age of 5 with the renowned Pipa musician and instructor, Li Jinghua, from China Music Academy. She was graduated from Hunan Changsha Music College in 1982, and worked at Hunan Huaguxi Theatrical Group as the leading Pipa player. She studied Pipa with most celebrated Pipa master Liu Dehai from 1985-1987 at China Conservatory of Music.  From 1987 to 1988, she joined Hong Kong Chinese Orchestra, and studied Pipa with Li Jinghua again. From 1993 to 1996, she studied Guzheng with the acclaimed Guzheng musicians Wang Di and Li Wanfen. Since the late 1980s, she studied Guqin, the most ancient instrument that is still being played today, with the daughter of Liu Shaochun, one of the masters in the Guangling School of Guqin music. She has devoted to learning, performing, and teaching these traditional Chinese instruments for more than twenty years. She has visited and performed at more than thirty countries, including US.