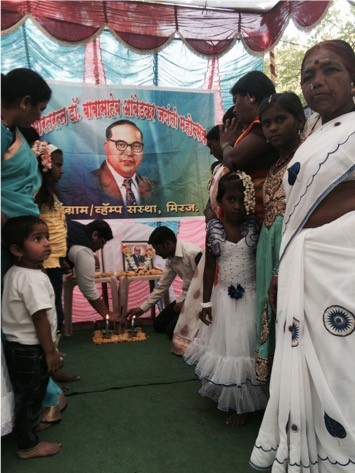 How are the politics of caste, gender, religion and sexuality entangled in contemporary India?  How are they inhabited by Dalit women?  This talk draws on ethnographic research conducted in Karnataka, South India to consider these questions. In particular, it focuses on three women: a pujari of the Devi Yellamma —a jogati or devadasi; a self-described ‘housewife’ who follows both Hinduism and Buddhism; and a college going convert to Buddhism who leads prayers for young women in her room in the ladies hostel.  By dwelling on three key themes within anti-caste feminist studies—epistemology (standpoint), mobility, and sexuality—this talk argues for more nuanced conceptualization of importance of religiosity, the question of agency, and the force of heteronormativity in the field of gender and caste studies.

Lucinda Ramberg is Assistant Professor of Feminist, Gender and Sexuality Studies, and Assistant Professor of Anthropology, at Cornell University. . Her 2014 book, Given to the Goddess: South Indian Devadasis and the Sexuality of Religion (Duke University Press, 2014), won multiple national book prizes in 2015 including the Clifford Geertz Prize for best book in the anthropology of religion, the inaugural Michelle Rosaldo Prize for a first book in Feminist Anthropology, and the Ruth Benedict prize from the Association of Queer Anthropology. Ramberg’s other publications include: