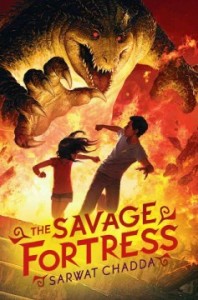 /* Starred Review */ Gr 8 Up — On vacation in India with his aunt, uncle, and younger sister, pudgy Ash Mistry can’t wait to get back home to his video games and London friends. But when his uncle is offered a million pounds to assist mysterious Lord Savage with translations from an archaeological find, Ash becomes embroiled in an overwhelming and deadly real-life battle. He realizes that Lord Savage is not an ordinary mortal and that his minions are rakshasas (demons). Determined to save his uncle, Ash unwittingly betrays himself and becomes the rakshasas ‘s target. When he falls into a collapsing pit, he discovers a golden arrowhead-the aastra (weapon) of the ancient goddess Kali. With a splinter of it lodged in his thumb, Ash is able to channel Kali’s power. But it is not enough to save his uncle and aunt, and, when they are killed, he sets out to save his sister-and the world-from Ravana, the all-powerful demon king, and his gruesome forces of evil. Chadda weaves Hindu mythology into an engrossing story of a shy, overweight gamer who becomes transformed into one of his own comic-book  superheroes. Plot-driven, fast paced, exciting, and sometimes terrifying, The Savage Fortress is the ideal next step for readers who loved Rick Riordan’s books about the Olympian heroes and Anthony Horowitz’s “Gatekeepers” series (Scholastic). Vivid descriptions of contemporary India and flashbacks to the mythological battles of Rama and Ravana enrich this tale of a nerd’s metamorphosis. Make time for this novel, because it is very hard to put down.—Jane Barrer, United Nations International School, New York City –Jesse L. Ray (Reviewed January 1, 2013) (School Library Journal, vol 59, issue 1, p102)