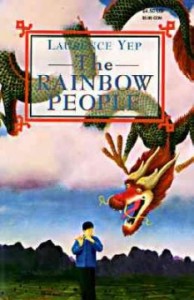 /* Starred Review */ Here, the author of such sensitive depictions of the Chinese-American experience as Dragonwings anthologizes 20 folk tales told by Chinese immigrants in California. Culled from 69 stories collected in a 30’s WPA project, the tales are organized into sections with themes like “Tricksters” or “Virtues and Vices,” each with a thoughtful introduction placing the individual stories in the context of the feelings and background of the original tellers (most of them living in Oakland). Yep’s telling is vigorous, often poetic, imbued with earthy humor and realism touched with fatalism. Most moving are a Rip Van Winkle-like tale of a man who gambles with the gods and comes home thousands of years later (“Homecoming”); and the title story, about a wanderer who sets the rainbow people free only to lose the one among them whom he’s beginning to love. In his introduction, Yep mentions Kenneth Burke’s description of folk tales as “strategies for living,” a theme he has integrated effectively here in this trenchant tribute to the resonance of storytelling in a particular culture–a richly entertaining collection for readers and storytellers. A handsomely designed collection–Wiesner’s understated b&w chapter openers are beautifully composed, counterpointing rather than competing with the stories. (Kirkus Reviews, April 15, 1989)