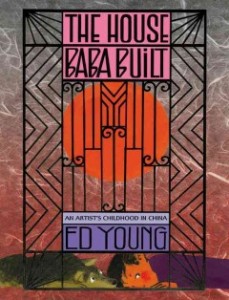 /* Starred Review */ Gr 3–8— Young brings his exquisite sense of design, expressive brushwork, and mastery of a variety of mediums to the story of his childhood in China. A note explains how Koponen helped shape the stream-of-consciousness text. In the opening spread, birds lift off from the bottom of the brown pages, filling the heavens. Red rice paper forms the delicate outlines of Young’s parents and their five children, connecting them as one transparent image. The text reads: “War was spreading to Shanghai, my father said, like the crows that came in summer….” Baba, an engineer, made a deal with a landlord in the safest part of the city: he would build a large brick home with gardens and a pool and give it to the landlord after inhabiting it for 20 years. The layers of cut paper and collage build, much like the house, which grew to accommodate relatives and refugees. This catalog of childhood pleasures (cricket battles, rooftop roller skating, silkworm hatching) is punctuated by distant bombs, fighter planes, and food rationing. Each scene is a surprise, as Young works in postcards, maps, currency, magazine images, family photographs, and acrylic portraits. Gatefold pages extend the scale. An illustrated afterword portrays Young’s own children at the household gates as well as a time line and floor plans. This tale of filial devotion provides a fascinating contrast to Allen Say’s Drawing from Memory (Scholastic, 2011) in which the Japanese -American artist describes his estrangement from his father and the nurturing received from his mentor.—Wendy Lukehart, Washington DC Public Library –Wendy Lukehart (Reviewed September 1, 2011) (School Library Journal, vol 57, issue 9, p187)