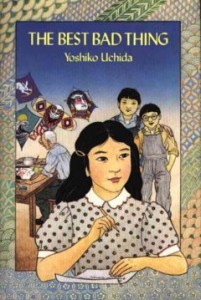 /* Starred Review */ In her stories of the Berkeley Tsujimuras in the 1930s, pursuing their own, Japanese-and-American life, Uchida is opening long-closed doors for children, just as Maxine Hong Kingston did for adults with her mysterious, earthy tales of California’s Chinese. It is the summer after A Jar of Dreams (1981), and almost-twelve Rinko does not want to go to stay with newly-widowed, slightly “crazy” Mrs. Hata, and help her pick cucumbers, do housework, watch over “two pesky boys” like younger brother Joji. But Mama and Papa make her feel “it was my Christian duty to go.” Auntie Hata, at any rate, is not uninteresting; and if eccentric, not crazy. As Papa has remarked, she may be the only Japanese  lady to drive a truck–and she drives fast, like Papa. Though she understands English, it makes her uncomfortable to speak it: “Like I’ve put my undershirt on backwards. You know?” That’s the way Rinko feels about speaking Japanese. Rinko learns other intriguing things. Auntie Hata isn’t Buddhist or Christian. She hasn’t electricity or a single clock–sons Zenny and Abu time themselves by the nearby trains. Baths are taken in a tub set outdoors, under the stars. An elderly, reclusive man, Mr. Yamanaka, lives in the barn. Then the “bad things” start happening, one after another. Instead of preventing Zenny and Abu from hitching rides on the trains, Rinko tries it herself–and sprains her ankle. In his kite-filled barn, Mr. Yamanaka applies a poultice–but she’s not to tell anyone but her parents about him. Little Abu, hitching a train ride, is severely hurt; Auntie Hata’s truck, the mainstay of her livelihood, is stolen. Are still more bad things in store? Not really. Mr. Yamanaka, an illegal immigrant, leaves when the welfare lady comes poking around–but it is good (as he writes) for him “to go home and to stop living in fear.” Auntie Hata stupefies and routs the welfare lady (with some help from new “medium” Rinko); and Mama and Papa get her a job–keeping house for the Japanese  bachelors in the church dormitory. “A brave lady” and a likable, live-wire girl–both with depths. (Kirkus Reviews, September 1, 1983)