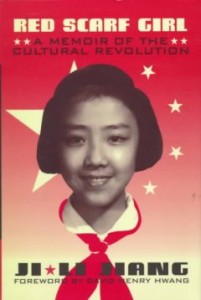 A child’s nightmare unfolds in Jiang’s chronicle of the excesses of Chairman Mao’s Cultural Revolution in China in the  late 1960s. She was a young teenager at the height of the fervor, when children rose up against their parents, students against teachers, and neighbor against neighbor in an orgy of doublespeak, name-calling, and worse. Intelligence was suspect, and everyone was exhorted to root out the “Four Olds”–old ideas, old culture, old customs, and old habits. She tells how it felt to bum family photographs and treasured heirlooms so they would not be used as evidence of  their failure to repudiate a “black”–i.e., land-owning–past. In the name of the revolution , homes were searched and possessions taken or destroyed, her father imprisoned, and her mother’s health imperiled–until the  next round of  revolutionaries came in and reversed many of the  dicta of the last. Jiang’s last chapter details her current life in this country, and the  fates of people she mentions in her story. It’s a very painful, very personal–therefore accessible–history. (Kirkus Reviews, September 15, 1997)