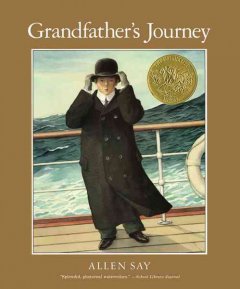 /* Starred Review */ “The funny thing is, the moment I am in one country, I am homesick for the other,” observes Say near the end of this poignant account of three generations of his family’s moves between Japan and the US. Say’s grandfather came here as a young man, married, and lived in San Francisco until his daughter was “nearly grown” before returning to Japan; his treasured plan to visit the US once again was delayed, forever as it turned out, by WW II. Say’s American-born mother married in Japan (cf. Tree of Cranes, 1991), while he, born in Yokohama, came here at 16. In lucid, graceful language, he chronicles these passages, reflecting his love of both countries–plus the expatriate’s ever-present longing for home–in both simple text and exquisitely composed watercolors: scenes of his grandfather discovering his new country and returning with new appreciation to the old, and pensive portraits recalling family photos, including two evoking the war and its aftermath. Lovely, quiet- -with a tenderness and warmth new to this fine illustrator’s work. (Nonfiction/Picture book . 4+) (Kirkus Reviews, October 1, 1993)