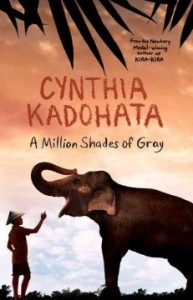 Gr 6–9— All Y’Tin, 13, ever wanted was to be an elephant trainer, and when he was 11, he became the youngest handler ever in his village. His life revolves around Lady and the other elephants in their small herd. But this is Vietnam in 1975 and the North Vietnamese are a threat to the Dega people of the Central Highlands now that the American forces are gone. The feared attack comes and half the village, including Y’Tin, is captured. He witnesses the murder of a fellow elephant keeper and, when he is ordered to help dig a mass grave, he knows escape is his only hope. When the chance comes, he and his friend Y’Juen slip into the jungle. They manage to find Lady and the other elephants, but the stress, fear, and anxiety about the war never leave Y’Tin. Even when he is reunited with his family, he cannot let go of the constant strain and despair for the future. When he is sent into the jungle to track down a lost Y’Juen, he spends a desperate night in fear. At this point, he decides the best thing is to try and make it to Thailand to find his future as an elephant trainer. Like a child in any war, Y’Tin has to cope with a situation that he doesn’t understand, one that has completely overturned his life. Kadohata depicts the questions, fears, confusion, and apprehension skillfully. Y’Tin is a thoughtful young man searching for clear answers where there are none.—Terrie Dorio, Santa Monica Public Library, CA –Terrie Dorio (Reviewed March 1, 2010) (School Library Journal, vol 56, issue 3, p160)